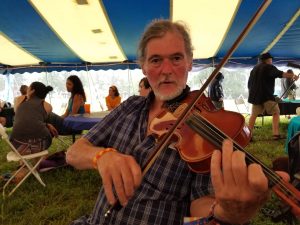 Sam was a well known musician in the Floyd and Roanoke areas. He had a magnetic personality that was always welcoming and genuine. He played the piano, violin and viola for private and public audiences. He started his career at the age of 11 on the viola and piano. Sam’s talent and determination led him to the NC School of the Arts and he graduated from The Juilliard School of Performing Arts in New York City.

Subsequently, Sam traveled the world and collected items from his travels, which will be held for auction in the late Summer, to benefit the Fund. A violin which he played has been donated by the owner for the auction. Details will be provided on this website later in the season, as well as on the Facebook page entitled “Friends of Sam Kephart.”

In his diverse career, Sam performed with the N.Y. symphony and on Broadway musicals. He also

participated for years as a member of a quartet in Colombia South America, and played with many other artists, both nearby and overseas. Locally, he has performed with the Roanoke Symphony Orchestra and with VBRMF’s summer concerts in Floyd. After his retirement he made his home in Floyd, Va. He was an integral part of the Floyd community and was a gift to all those that knew him. He deeply honored his stewardship here on this earth and used his talents to fully embrace his gardening and permaculture homestead.

His love will be treasured by those that knew him and he will be greatly missed. VBRMF’ s ‘Sam Kephart Memorial Fund ‘ will accept all financial and material donations for the fund and the auction.

Donations are tax deductible through VBRMF’s 501-C3 status. Christina Behrens, board member, will coordinate the fund, which already has $1,000.00 earmarked for the viola scholarships. Applications will be available on this website in the near future.