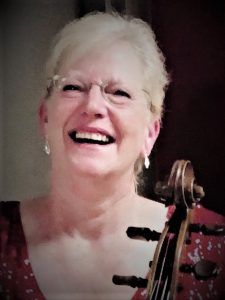 An avid chamber music devotee, Ms. Mikkelsen has been invited as Artist-in Residence to the Banff Centre (Canada), in both long and short-term residencies; and she has several times been Artist-in Residence at Yale, Princeton and Harvard Universities, Syracuse University, the University at Buffalo, Bucknell Unversity, East Carolina University, Cornell College, the University of Pennsylvania, Bard College, the University of Idaho, and UC Berkeley, among many others.  She has repeatedly been invited to numerous prominent United States music festivals, including the Norfolk (CT), Tangelwood (MA), Aspen (CO), Music Academy of the West (CA), Bowdoin (ME), and Interlochen (MI) festivals,  as well as several others across the globe.

As an enthusiastic advocate of contemporary music in addition to the classics, Ms. Mikkelsen has worked with, and recorded for, some of the world’s leading contemporary composers, including Pulitzer Prize winners John Corigliano, George Crumb, Jennifer Higdon, Steven Stucky, Virgil Thompson, David Lang, and Julia Wolfe.  She was also named recipient of the prestigious Charles Ives Award of Excellence from the Academy of Arts and Letters in New York City for her commission and subsequent performances of Edward Jacobs’ Al Momento for cello and pre-recorded tape.  She has performed throughout the US, Europe and Asia with numerous celebrated soloists, chamber musicians, and conductors including Yo-Yo Ma, Bobby McFerrin, Joan Tower, Renee Fleming, and Ursula Oppens, as well as the Cleveland, Juilliard, Colorado, and Cavani Quartets.

As cellist of the internationally renowned and award-winning Cassatt Quartet, Ms. Mikkelsen made appearances at Alice Tully Hall in New York City, Weill Recital at Carnegie Hall, the Tanglewood Music Theatre, Symphony Space, Bargemusic, the Kennedy Center, and the Library of Congress.  The Quartet was the recipient of numerous prizes and awards, including several CMA/ASCAP awards for adventurous programming, as well as commissioning grants from the National Endowment for the Arts, Meet the Composer, and The Mary Flagler Trust.

Currently, Ms. Mikkelsen serves as Principal Cellist of the Roanoke Symphony Orchestra, Opera Roanoke and Opera on the James.  She also performs regularly with the Williamsburg Symphony Orchestra, and is cellist of the four-member eclectic chamber music group, the Cardinal Ensemble, in addition to her many varied free-lance opportunities throughout the region.  Season highlights pre-Covid included a full recital tour of the Midwest that included the cities of Des Moines IA, Minneapolis MN, Omaha NE, Sioux Falls and Rapid City (SD).  An integral part of her three week tour included several workshops, mini-recitals and educational programs with a focus on underserved populations, in addition to her presentation of seven full-length formal recitals.

Exciting recent news includes the imminent release of a new CD that will include her own transcriptions of several familiar and popular songs of Schubert, Beethoven, and Brahms, as well as her arrangement of Debussy’s classic Claire de Lune.  She has previously recorded for the Sony, Koch, Naxos, New World, Point, CRI,  Tzadik, Bandcamp, and Albany labels.

Also an award-winning graphite artist, Kelley enjoys maintaining her vast and varied collection of exotic plants, treasuring everything nature, and spending quality time with her family (and animals) in her spare time at home in Rockbridge County, Va.