1st half of Concert in Celebration Hall;
2nd half at adjacent Lake Pavilion (weather permitting)

HELP with Ordering Online – IF you get stuck 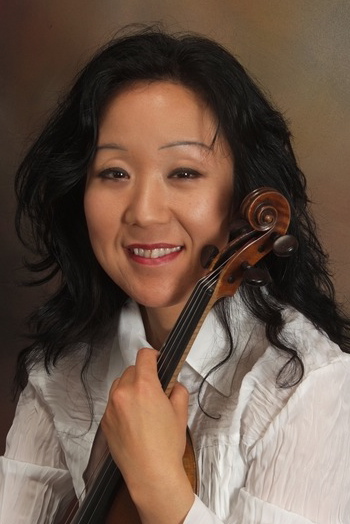 Violinist, Akemi Takayama has served as the concertmaster of the Roanoke Symphony Orchestra since 2004. Ms. Takayama appears regularly as soloist and concertmaster of the RSO, and Williamsburg Symphonia as well as an active chamber musician and associate professor at the Shenandoah University Conservatory of Music where she holds the Victor Brown Endowed Chair. She was also invited to teach at Oberlin College throughout the Fall of 2012. Ms. Takayama was a member of the internationally renowned Audubon Quartet for fourteen years while the group toured regionally and nationally. Her recordings with the Audubon Quartet include four CDs, all available on the Centaur and Composers Recordings labels.

Akemi Takayama’s recent solo performances with orchestras include Daugherty’s Fire and Blood and Ladder to the Moon, Mendelssohn’s Double Concerto, Vivaldi’s The Four Seasons, Pärt’s Fratres, Beethoven’s Violin Concerto, and Brahms’s Double Concerto for violin and cello, Mozart’s Violin Concerto, Bach Concerto, Mendelssohn Violin Concerto, and Roskott’s Violin Concerto. She has performed at and served on the faculties of the Chautauqua Institute in New York, the Idyllwild School of the Arts in California, the Brevard Music Center in North Carolina, Shenandoah Performs in Virginia and at Virginia Tech. During her graduate studies, Akemi was a teaching assistant to the renowned Donald Weilerstein at the Cleveland Institute of Music, where she earned both an Artist Diploma and a Master of Music degree. Previously, she studied with Toshiya Eto and Ryosaku Kubota at the renowned Toho School of Music in Tokyo, where she earned her bachelor degree in music performance. She also studied with Brian Hanly at the University of Wyoming where she earned her professional studies degree. Ms. Takayama won a position in the prestigious Marlboro Music Festival and the Isaac Stern Music Workshop. The late Isaac Stern said of Ms. Takayama “she is a true musician and will always bring credit to any group that she works with.” Akemi indeed brings great credit to the RSO and to our region.

Violinist, David H. Park, ‘a soloist with extraordinary artistic gifts’ (Salt Lake Tribune), ‘that commands respect’ (Le Journal Sud Ouest), started playing the violin at the age of five in Seoul, Korea. Park has studied with two of the most distinguished pedagogues, Josef Gingold and Dorothy Delay. He received his Bachelor of Music at the University of Indiana and Master of Music at the Juilliard School. At the age of 14, he was one of the youngest students of the legendary Jascha Heifetz.

Park maintains a balance between his engagements as soloist with orchestras throughout the world and his recital and chamber music activities. Park appeared as a soloist with the Utah Symphony, the Seoul Philharmonic Orchestra, the New York Festival Orchestra, the Korean Chamber Orchestra, Aspen Music Festival Orchestra, the Daegu Symphony, the Inchon Symphony and the Santa Ana Symphony. Park has given recitals in many of the world’s great concert halls including Carnegie Weill Hall and Alice Tully Hall in New York, Salle Pleyel in Paris, and Sejong Music Center in Seoul. Park has also performed on national television and radio broadcasts in the United States, France, Hong Kong and Korea. Recently, he has been featured on CBS 2 News and FOX 13 News, as well as Sirius XM National Radio hour-long program of live performance and interview on Bach Sonatas and Partitas. Furthermore, Park has participated as both soloist and chamber musician in music festivals of Aspen, Santa Barbara, Vienna, and Aix-en-Provence.

Some of Park’s highlights include his first return to Seoul, Korea, performing the Lalo Symphonie Espagnole with the Seoul Philharmonic. Park made his New York debut performing Vivaldi’s Four Seasons in Carnegie Weill Hall. Also, making his debut in Aix-en-Provence Music Festival, he performed both solo and chamber music in collaboration with Augustin Dumay which was broadcasted nationally by France Musique, the premier classical radio station in France. In a highly anticipated Cultural Exchange Gala Concert, Park soloed with the Pyongyang State Orchestra of North Korea. Recently, he performed with Roanoke Symphony, Crown City Symphony, Pan-Asia Symphony Orchestra in Hong Kong, and Seoul Philharmonic Orchestra as a Guest Concertmaster. Furthermore, Park was invited to give a recital for the Musique au Coeur du Medoc concert series in Bordeaux, France. He has presented rare series of concerts pairing Stradivari and Guarneri del Gesu violins with critical acclaim. In 2012, Park will make his debut at the Merkin Hall in New York soloing with the Ureuk Symphony Orchestra.

Park is a Professor of Violin at the University of Utah. In 2005, Park held a position of Distinguished Artist at the University of California Santa Barbara. He has served on the jury of the Irving M. Klein International Competition in San Francisco. As a concertmaster, he has worked with Leonard Slatkin, Myung Whun Chung, Joseph Silverstein, John Williams, Keith Lockhart, Robert Mann, and Reinhart Goeble of Antiqua Cologne.