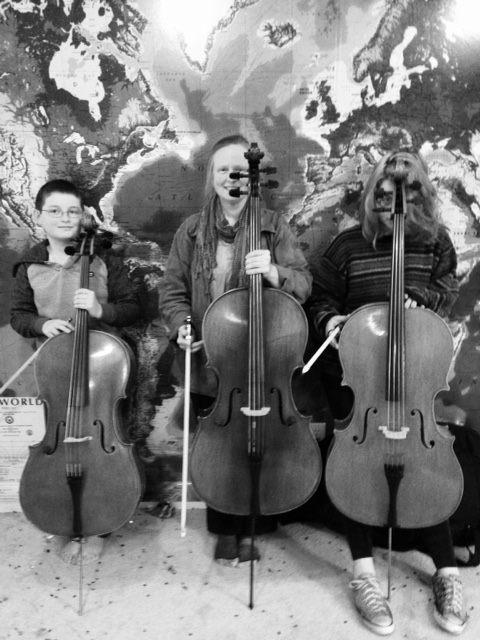 Lisa Liske-Doorandish, an esteemed cellist, will perform at the June Bug Center in Floyd, Virginia, on Sunday, February 21, at 2:30 pm. She will be joined by Taylor Baldwin, pianist, and four young musicians: David Smith, Eleanore Liske-Doorandish, Elizabeth Shelor, and Aaron Shelor.

Sponsored by Virginia’s Blue Ridge Music Festival, the concert is free, although donations are welcome. Afterward audience members will enjoy a reception. The June Bug is located at 251 Parkway Lane South.

Lisa chose to make her home in this area after completing her Master’s degree at the San Francisco Conservatory of Music. When a local music school was seeking a cello teacher, she was recommended by her Suzuki pedagogy teacher (Annette Costanzi, now of London). Since 1998 she has directed her own studio, Community Cello Works. She has taught at Washington and Lee, Southern Virginia, and Hollins Universities. Also she she has become a sought-after clinician at workshops and master classes.

Performing both solo and chamber music, Lisa has served as associate principal cello of the Roanoke Symphony and principal cello of Opera Roanoke for ten years. Simultaneously she has developed a method of teaching high-quality cello technique and musicianship.

Lisa finds that the performing and teaching aspects of the cello complement each other and have equal importance to the community. Her program on February 21 is unique. For one reason, it presents some of her favorite repertoire for unaccompanied cello; for another, it features youngsters whom she has taught and mentored.

During her years at San Francisco Conservatory, Lisa was profoundly influenced by the violinist Anthony Martin, a member of New Esterhazy Quartet, Philharmonia Baroque, and Orchestra of the 18th Century. She has lived into his words: “My goal is to turn my students into my colleagues as quickly as possible.”