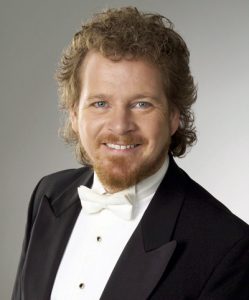 Conductor of the Roanoke Symphony

Under David Stewart Wiley’s energetic and inspiring leadership since 1996, the RSO has experienced remarkable artistic growth and expansion.  Wiley also serves as Music Director & Conductor of Orchestra Long Island.  He continues a special relationship as the Artistic Director of Virginia’s Blue Ridge Music Festival.  He previously served as Assistant Conductor of the Minnesota Orchestra and the Indianapolis Symphony Orchestra.

In addition to taking the RSO to new artistic heights, Wiley has conducted such distinguished symphonies as Atlanta, Buffalo, Cincinnati, San Francisco, Milwaukee, Indianapolis, Minnesota, Saint Louis, Oregon, Honolulu, and Utah.  Wiley’s music has taken him to dozens of countries in Asia, Africa, and Europe.  In 2019, our Maestro made his exciting Boston Pops debut in three ways: as conductor, composer, and pianist at Boston’s Symphony hall for a sold-out audience.

Wiley is also an engaged and active community partner, having been named Roanoke’s “Citizen of the Year” for his outstanding service and outreach to diverse communities. His energetic work bringing classical music to youth in our minority communities has been steadfast, and he was honored by the NAACP as Citizen of the Year in the Arts for his service.   Wiley partners with schools and numerous arts and civic organizations throughout the region, and the RSO & Wiley received a Distinguished Music Educator Award from Yale University

As a solo pianist, Wiley has performed with numerous major orchestras throughout the United States including Minnesota, Indianapolis, Oregon, Honolulu, Wheeling, and West Virginia, performing major concerti, Baroque to contemporary, often conducting from the piano.  He has appeared as both a jazz and classical pianist in Boston’s Symphony Hall and in recital and chamber music appearances throughout the U.S. as well as in China, Russia, Romania, Germany, Hungary, Italy, the Czech Republic, and Bulgaria.