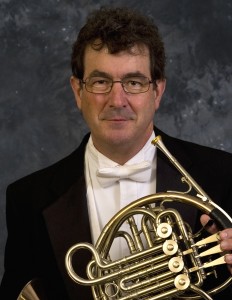 Wallace Easter, a western New York native, began study of the horn at age nine and received early instruction from Lowell Shaw, hornist with the Buffalo Philharmonic and noted composer of music for the horn.  While attending the Oberlin Conservatory of Music he studied under Robert Fries, who came to Oberlin from the Philadelphia Orchestra.  Mr. Easter’s graduate work at the Catholic University of America included horn study with Joseph Singer of the New York Philharmonic.  Mr. Easter began his professional performing career with the United States Marine Band , “The President’s Own” in Washington, D. C..  As a member of the Marine Band, he toured the United States and performed frequently at the White House.

In 1981, Mr. Easter joined the faculty of the Music Department at Virginia Tech and the Roanoke Symphony as principal horn.  His academic duties at Tech include teaching the horn studio, the University Horn Ensemble and music theory.  Mr. Easter has been a featured soloist with orchestras in the mid Atlantic region and has also performed in recital and at professional conferences and music festivals in the United States, Europe and Africa.  He has served as host for regional horn workshops at Virginia Tech.  Other professional activities include residencies as artist/faculty for the Virginia Governor’s School for the Arts, Skyline Brass Music Festival, Roanoke Youth Symphony Summer Institute and the Blue Lake Fine Arts Camp in Michigan.  He is frequently asked to give master class presentations at music schools and festivals. Recent master classes have covered a wide geographic area from the National Music Camp at Interlochen, MI to the STTEP Music School in Pretoria, South Africa.   He has also been principal horn of the Wintergreen Summer Music Festival since June 2000.  He has written and has been interviewed for articles in the Horn Call, the official publication of the International Horn Society.  Mr. Easter is featured on the most recent CD releases of the Hornists’ Nest.  The album titled The Fripperies is frequently heard on National Public Radio affiliates.  The most recent release from the Hornists’ Nest titled “…ipperies” came out in June 2009, featuring more original music for horns by Lowell Shaw.  Besides Mr. Easter, this latest CD features the talents of Jeffrey Snedeker, Calvin Smith, Timothy Schwartz and Wallace Easter III.