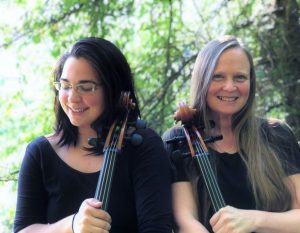 3Celli (Eleanore, Lisa, and Miriam Liske-Doorandish) will offer two concerts at the end of July with a triple benefit: The Blacksburg Refugee Partnership; the next step in the education and international networking opportunity for a young artist with a concern for social justice, Miriam Liske-Doorandish; and the audiences themselves. The three cellists will present an hour-long program of music for cello solo and ensemble, ranging from Renaissance and Baroque to Romantic to 21st century to international traditional music. Audiences in Floyd and Blacksburg will have a chance to enjoy the great sound of the cello in some of its many roles, from its origins as a Renaissance and Baroque bass instrument through its exciting genesis as a solo voice during the centuries since then. The musicians have a fundraising goal of  $4,000. Half of the proceeds from donations at the door will go to Blacksburg Refugee Partnership, the other half toward Miriam’s travel to Prussia Cove [England] Open Chamber Music. There she will have an opportunity to further her development as an artist and make connections with other like-minded young musicians from around the world. Once the goal is reached, all further proceeds will go to the refugee partnership.  The concert is free but donations will gladly be accepted.

Blacksburg Refugee Partnership (“doing the work of resettlement with love”) supports families who have come to the United States to escape their war-torn countries. BRP currently supports 19 children and 9 adults in Blacksburg, as well as co-supporting 10 children and 2 adults in Roanoke. The families come from Syria, Afghanistan, Somalia, and Burundi. BPR has over 300 members, and partners with a dozen faith communities and ten other local community organizations to do its work of helping the refugee families become integrated in the community and become self-supporting. 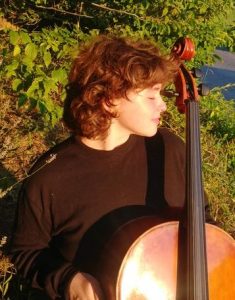 For a musician like Miriam, the question is not just about career-building but about making a difference in the world. She is dedicated to conflict resolution, environmental ethics, and community development.  Miriam, a recent graduate of the Oberlin Conservatory who will return there for an Artist’s Diploma, plans to attend the world-renowned Prussia Cove session in September. Miriam grew up in Eggleston, in Giles County. From age two, she studied cello with her mother, Lisa. Lisa is a graduate of the San Francisco Conservatory of music whose Blacksburg studio Community Cello Works has been at the forefront of music education and cello study (ages 3 through adult) since 2000. Lisa was a member of the Roanoke Symphony and the Opera Roanoke orchestra for many years, and a faculty member at Hollins University and Roanoke College. She now performs widely as a soloist and chamber musician. Miriam’s sister Eleanore is now 16 and a writer as well as a cellist and chef.

The link between art and social responsibility is direct and reciprocal; art expresses the spirit of the times and gives voice to its people’s needs – and the requirements of the times give artists the seeds of their work. Cellists have long contributed to their communities in times of need; we can recall Pablo Casals and Paul Tortelier standing for peace; Mstislav Rostropovich playing at the Berlin Wall at the time of the end of the partition between East and West Germany; Yo-Yo Ma advocating for the recognition, preservation, and growth of the musical and cultural traditions of the Silk Road cultures and also for the importance of arts education in today’s society; and the brave playing of The Cellist of Sarajevo. As Dave Eggers stated in a New York Times piece recently, “with art comes empathy. It allows us to look through someone else’s eyes and know their strivings and struggles. It expands the moral imagination and makes it impossible to accept the dehumanization of others. When we are without art, we are a diminished people – myopic, unlearned and cruel.” In this spirit, 3Celli invites you to come enjoy the music.

For more information related to these projects: